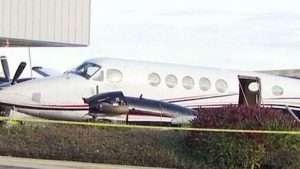 A 17-year-old girl stole a small plane from a California airport but crashed it into a nearby building on Wednesday, a report said.

The teen slipped into the Fresno Yosemite International Airport at about 7:30 a.m. and boarded a King Air 200 plane, according to yourcentralvalley.com, citing airport officials.

She then fired up one engine and took the plane on a joyride before crashing through a fence and into an airport building, the report said.

“The aircraft never became airborne, and there was no fire,” airport officials said, according to the new site.

“The aircraft sustained substantial damage. No injuries occurred in this incident,” the officials added.

The teen was found still sitting in the pilot’s seat, wearing a headset, when cops arrived.

She was uncooperative with police, who charged her with theft of an aircraft, the report said.