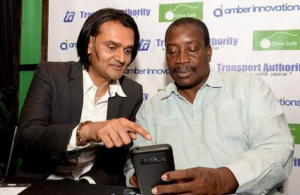 (JAMAICA OBSERVER) – THE Ministry of Transport and Mining has officially launched a new mobile app called Drive Safe , which is a reporting mechanism that allows the public to upload videos and pictures of drivers committing various road traffic-related breaches.

Uploads include date, time and location stamps. The app also allows users to view their own historical video/picture uploads, along with submissions from other users.

The video and picture uploads are screened by the monitoring agency, the Transport Authority, before being published on the app.

To date, the Transport Authority has received more than 400 submissions via the application.

In his remarks at the official launch on Tuesday at the ministry’s Maxfield Avenue offices, St Andrew, Mining and Transport Minister Robert Montague said the Transport Authority has partnered with the Jamaica Constabulary Force (JCF) to post relevant images and reports to the app.

These are also shared with the Public Safety and Traffic Enforcement Branch of the JCF. This partnership, he said, will assist in providing effective investigation of uploaded footage.

“It is up and running. Already, we have got 400-plus submissions from the public, and we have taken action. I want to encourage everybody to download the app and to encourage your children and your friends to download it, so that when you see persons driving and overtaking illegally, or overloaded vehicles, report them,” he urged.

Montague said the initiative is part of the ministry’s 16-point plan geared at reforming the public transportation system.

Some of the key strategies in the plan, he said, are the introduction of digital training; monitoring and enforcement mechanisms geared at formalising the public passenger vehicle (PPV) sector; empowering commuters by giving them greater access to PPV-related information and reporting tools; and enhancing the Transport Authority’s intelligence capabilities to undertake targeted road-monitoring interventions.

Montague said the Government is committed to formalising and improving the service delivery within the PPV sector.

The minister said the app is a continuation of the ministry’s drive to bring innovation and technology into the PPV industry, where it will be incubated and eventually moved into the wider transport sector.

Meanwhile, Montague said the number of road fatalities has exceeded the national target of 300.

“Unfortunately, we gather on a morning when we have surpassed 400 road fatalities on our streets. Our national target was 300. We are now at over 400,” he noted.

Montague said the high number of tragedies on the motorways is unacceptable, adding that the real tragedy is the families left behind to mourn loved ones lost to reckless driving.

“I make the appeal once more that you take time on the roads. It is better to be 10 minutes late in this world than to be 20 years early in the next world,” he implored.