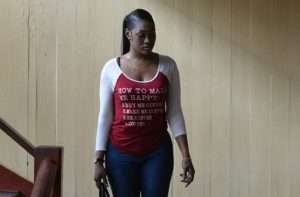 Callendar appeared at the Georgetown Magistrates’ Court and was found guilty after the completion of the trial. Magistrate McGusty postponed sentencing and stated that she will be ruling after the presentation of a probation report on ‘Lola’

Magistrate McGusty had indicated, some weeks ago, that she would give her ruling in the matter, after reviewing footage of a fight between Pompey and Callendar.

Callendar had pleaded not guilty to the charge when she made her first appearance at the Georgetown Magistrates’ Court.

Particulars of the charge stated that, on April 6, 2018, at Leopold Street, Georgetown, she (Callendar) inflicted grievous bodily harm on Onika Pompey.

According to information, on the day question, Callendar and Pompey had a misunderstanding which resulted in a fight. Pompey received injuries about her body including bite marks.
Callendar is presently on bail for the offence.