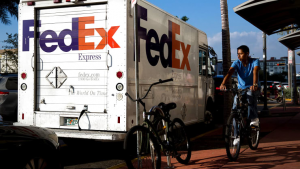 cnbc.com- Earlier Tuesday, FedEx reported weaker-than-expected fiscal second-quarter results and lowered its full-year earnings outlook for 2020. Shares of FedEx slid 10% on Wednesday. The company has lost just over 4 billion in market value since Tuesday’s close and the stock is down about 9% year to date.

The company blamed the disappointing quarterly results on weak global economic conditions, rising costs associated with ground-delivery expansion, online holiday sales shifting to the third quarter and the “loss of business from a large customer,” which Graf later confirmed was Amazon.

“The loss of volume from Amazon had a larger negative impact to the second quarter than the first quarter since the FedEx ground contract with Amazon expired in August,” Graf said on the call.

FedEx announced plans in August to end its ground-delivery contract with Amazon, It halted its express U.S. shipping contract with Amazon in June. Earlier this week, Amazon fired back by announcing it will temporarily prevent third-party sellers, which make up 58% of its total merchandise sales, from using FedEx’s ground and home delivery services for Prime orders.

Amazon said it made the decision based on FedEx’s poor delivery performance and to make sure shoppers would receive their packages in time for Christmas. The company didn’t indicate when it would resume the service.

For sellers, the move threatens to throw many of their businesses into a tailspin during the busiest shopping period of the year. Sellers were forced to find a new carrier and could potentially face higher upfront costs as a result.

The spat between Amazon and FedEx has heated up significantly in the past year. In September, FedEx started mentioning Amazon as a competitor, after denying the company posed a threat. Amazon has gradually distanced itself from FedEx and UPS by building up its own delivery network.