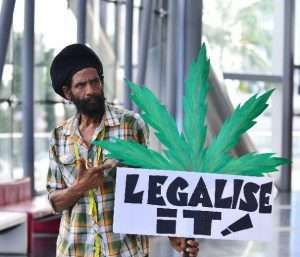 trinidadexpress.com- A “new State” will be created next week when weed is decriminalised in Trinidad and Tobago.

So said Prime Minister Dr Keith Rowley who announced today that President Paula-Mae Weekes is expected to proclaim the legislation for the decriminisaltion of marijuana on Monday December 23, 2019.

Rowley said the Cabinet approved the date for the proclamation of The Dangerous Drugs (Amendment) Bill, 2019.

The Bill was passed in both the House of Representatives and the Senate.

Rowley, speaking at the Post Cabinet news conference today said once the law is proclaimed it opens doors to several things including the release of prisoners who are currently incarcerated for small quantities of marijuana.

“Once it is proclaimed a new State will exist and that will allow us to do a number of things including persons who are incarcerated for the minimum quantities, to be released and persons who have to get their records expunged there is a process,” he said.

Once decriminalised, some of the benefits include: a person would be able to possess 30 grams of marijuana and under. They would also be able to have four marijuana plants – male or female- at their home per person.