Mikey Live
HomeRegionalGuyana Mahaicony Accident: Pregnant Mother Was Due To Give Birth Next Month
Regional

Guyana Mahaicony Accident: Pregnant Mother Was Due To Give Birth Next Month 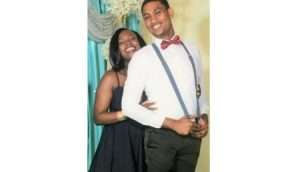 newsroom.gy- Family members of the five persons who died in the horrific accident at Fairfield Mahaicony Wednesday are in a state of deep shock.

Among them is Thagius Khanai, the husband of 30-year-old Alana Vaughn – the medex who was eight months pregnant.

Khanai was lost for words as he described his wife as hardworking, intelligent and an exceptional mother to her two girls, ages 6 and 1 year nine months.

Khanai, a Prison Officer, said Alana was due to give birth on January 6 to her third daughter.

Fighting to hold back tears, he explained she was on her way to the Mahaicony Health Centre for her final prenatal checkup.

“I was at Camp Street when I received the first call. By the time I reach to Mon Repos  I got another call . The person didn’t had to say anything. By the screams in the background I know that my wife was gone,” a torn Khanai told the News Room.

He now has to be brave for his two young daughters.

“I now have to live for my daughters,” he mustered the courage to say whole his six-year-old daughter looked up and said: “Mommy and the baby is now an angel”.

Vaughn was a career-driven woman; due to the love and commitment for her job she received a scholarship to study medicine.

At the time of her demise, she was a second-year student at the University of Guyana.

She died when the minibus she was travelling in suffered a blowout and crashed head on into a truck at around 11:30hrs Wednesday.