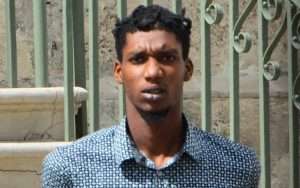 (BARBADOS TODAY) – A senior magistrate is calling on male support groups to embark on counselling programmes for young men to learn appropriate behavior in relationships.

This suggestion was made today by Magistrate Douglas Frederick, after a 21-year-old man admitted to searching his girlfriend’s underwear for clues of infidelity and striking her multiple times. This morning, Mark Junior Gibbs of 2nd Avenue Bibby’s Lane pleaded guilty to assaulting Tiffany Welch and occasioning her actual bodily harm on November 12, 2019.

According to the facts of the case, which were outlined by prosecutor, Sergeant Vernon Waithe, the two were involved in an ongoing relationship. On the day of the incident, the accused “snatched the complainant’s under garments and refused to give them back. He then cuffed her on her neck. It was also revealed that the accused received anger management in the past from the Psychiatric Hospital.

When asked to account for his actions, Gibbs denied “cuffing” Welch, stating instead that he gave her “two slaps.” He admitted to taking the complainant’s underwear as he was suspicious that she was unfaithful.

“I am sorry. I gave her two slaps, she told me she done and she don’t care about me. We used to fight and she would move out… She come [home] with a guilty look on her face and smelling a sort of way that she not accustomed to,” said Gibbs, adding that he still loved Welch but understood now that it is over.

Gibbs was ordered to serve 120 hours of community service. He was also advised to get some counselling. And ordered to return to court on March 30, 2020. Before releasing Gibbs on $1500 bail, Frederick cautioned the young man to stay away from the complainant.

“I want to get it through your head that this relationship is over. I am embarrassed hearing these details, you need some counselling. This is embarrassing with you trying to check the woman’s underwear. This possessiveness is why men kill women because they couldn’t take a done. You have no ownership of a woman. Groups like MESA are important for men to talk, so that youngsters can get experience when it comes to dealing with relationships,” Frederick stressed.