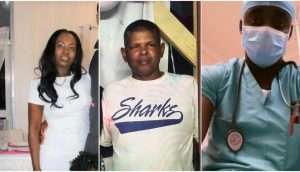 (NEWS ROOM GUYANA) – Alana Vaughn, a 31-year-old pregnant nurse, is among the five persons who were killed in the Fairfield, Mahaicony deadly accident on Wednesday.

Vaughn of Farm, Mahaicony was attached to the Mahaicony Hospital.

Others who died have been identified as 33-year-old Keon Sealey, who also worked at the Mahaicony Hospital, 76-year-old Maxwell Thom and 64-year-old Ewart Reynolds of Calcutta, Mahaicony.

The driver of the route 50 minibus died at the scene; he was identified as Seechan Chandilall of Bath Settlement, Berbice.

The News Room understands that the minibus was heading in the direction of Georgetown when it lost control at about 11:30hrs and collided head-on with a distribution truck heading in the eastern direction.

Regional Commander Yonette Stephens told the News Room that the bus was proceeding at a fast rate when it suffered a left rear wheel blowout and as a result the driver lost control and slammed into the truck.

The four persons who were injured were taken to the Mahaicony Hospital and subsequently transferred to the Georgetown Public Hospital.

Fifteen-year-old Angela Jacobs of Mahaicony sustained head injuries and had her left arm amputated while her father David Jacobs also sustained injuries to the head.

Cecil Gordon, a passenger of the bus and the driver of the truck, Shurlan Wills both sustained injuries to the head as well.