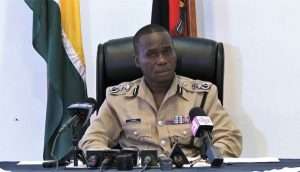 (NEWS ROOM GUYANA) – Two Police Constables, who are brothers, are under close arrest for allegedly beating and burning a 17-year-old boy who they accused of breaking and entering a house at Parfaite Harmonie, West Bank Demerara on Monday.

Commissioner of Police Leslie James told a news conference that the house belongs to the ranks at the center of the probe. These ranks are also the sons of a senior Police Officer.

James told the media that the two ranks – one stationed at the Tactical Services Unit (TSU) and the other at Wales Police Station – picked up the young man at around 11:30hrs from his Westminster home in a private vehicle and took him to the house he allegedly broke into.

At the location, he was badly beaten and burnt with hot water by the two Police Constables.

The top cop said that the investigation against the ranks is being led by a senior member of the Police Force.

The matter was brought to the attention of the Police after the young man’s family made a report to the Wales Police Station. The alleged break and enter occurred on December 12.

This incident mirrors a case which occurred at the Leonora Police Station, West Coast Demerara in 2009 when 14-year-old Twyon Thomas was tortured by Police who set his private parts on fire.