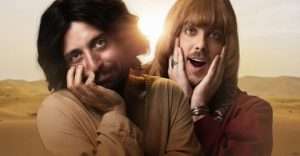 (NEW YORK POST) – You could call this the crass temptation of Christ.

A Brazilian comedy streaming on Netflix that depicts Jesus Christ as closeted and gay is drawing fire from “seriously offended Christians.”

The film “The First Temptation of Christ” depicts Jesus paying a visit — along with a close bud named Orlando — to parents Mary and Joseph for the savior’s 30th birthday. Nearly 1.8 million people have signed a Change.org petition demanding the removal of the video — as well as a public retraction — from the streaming service for “the crime of villainous faith.”

In the trailer for the 46-minute satire, from YouTube sketch show “Porta dos Fundos,” Jesus (Gregorio Duvivier) and Orlando (Fábio Porchat) walk in on a surprise party thrown by his parents and friends, who try to figure out who his new companion is.

The film has drawn criticism from Eduardo Bolsonaro, the son of Brazilian President Jair Bolsonaro, who weighed in on Twitter.

“We are in favor of free speech, but is it worth attacking the faith of 86 percent of the population?” he tweeted, calling it “garbage” in another post.

Bishop Joseph E. Strickland of the Diocese of Tyler, Texas, also said he had canceled the streaming service, tweeting that “blasphemers don’t deserve a penny of support!” Other protesters noted the “extremely offensive” content and suggested that Netflix has “crossed the line.”

Naysayers to the protests seem to think bashing the film is misguided, with one saying that the movie is a “satire that makes fun of most Christian beliefs” and suggesting that outraged people are missing the broader picture, saying, “There’s a lot that people could find disrespectful and blasphemous about the movie. But they only see a gay Jesus.” Another Twitter user advised the angry mobs to calm down, offering that the movie “isn’t hurting a single thing. Damned snowflakes need to take a cold shower.”

Decider noted the growing rebellion from Christians while also suggesting the “swishy” depictions of gay men in the show were veering “towards the problematic” themselves.

Meanwhile, “Porta dos Fundos” (“Back Door” in Portuguese) seems to be taking everything in stride, tweeting that they “celebrate the success” of the Christmas movie and even linking to another Change.org petition.

When reached by The Post, Netflix declined to comment but provided this statement from the film’s creators: “Porta dos Fundos values artistic freedom and humor through satire on the most diverse cultural themes of our society and believes that freedom of expression is an essential construction for a democratic country.”