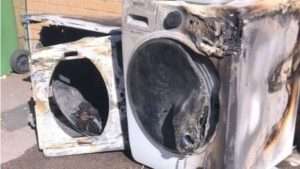 (SKY NEWS) – Half a million Hotpoint and Indesit washing machines are being recalled over a potential fire hazard, manufacturer Whirlpool has said.

As many as 519,000 of the machines sold in the UK between October 2014 and February 2018 may be affected by a fault with the door-locking system that could cause them to overheat and catch fire.

Owners who bought a Hotpoint or Indesit appliance during that window are urged to contact Whirlpool to find out if they are affected – and should unplug and stop using them immediately.

It comes just months after Whirlpool recalled a similar number of tumble dryers because of another fire risk, which allowed fluff from clothes to reach heating elements.

Months later it emerged that thousands of affected appliances were still in people’s homes, and the US-listed firm has been criticised for the speed at which it modifies or replaces faulty machines.

In a recent report, the Business, Energy and Industrial Strategy Committee also expressed concern about how potentially dangerous machines were being modified.

Whirlpool had earlier revealed that, in recent years, it had logged 54 fires in its tumble dryers and admitted that three of those were models which had already been modified.

The report followed the inquiry into the Grenfell Tower tragedy, during which inquiry chairman Sir Martin Moore-Bick concluded that he had “no doubt” the deadly blaze was caused by an electrical fault in a Hotpoint fridge-freezer.

He dismissed a claim by Whirlpool that the fire could have been sparked by a discarded cigarette as “fanciful”.

The latest recall should officially begin in early January and all affected customers will be able to claim a free replacement or free in-home repair, the company has said.

In the meantime, those desperate to continue using their washing machine should only use sub-20C cold water cycles, which significantly reduce the risk of the fire.

Whirlpool Corporation vice president Jeff Noel said: “We sincerely apologise for the inconvenience and concern this may cause to our customers, particularly over the Christmas period, but we hope people will understand that we are taking action because people’s safety is our top priority.

“Preparing for a recall of this scale is a complex operation and we are working tirelessly to ensure we are ready to start offering replacements or repairs to our customers from early January.”

He added it was an issue the firm had “inherited” by purchasing Indesit back in 2014, but consumer watchdog Which? said the company’s reputation on product safety was “in tatters”.

“People will rightly be asking what Whirlpool knew about these fire-risk machines and when, so there must now be a thorough investigation into this public safety issue,” said strategic policy adviser Sue Davies.

“We know the company has a track record for appearing to put corporate reputation ahead of public safety in its disgraceful handling of the unsafe tumble dryer crisis.

“Customers will be hugely frustrated that this recall is not set to start for weeks and that they are not being offered refunds for machines from a brand they may no longer want to have in their homes.”

Customers can check if their machine is affected by visiting washingmachinerecall.whirlpool.co.uk or by calling a free hotline on 0800 316 1442, quoting the model and serial number.

The numbers can be inside the door and on a label on the rear of the appliance.

Many concerned owners have had difficulty accessing the website so far, with complaints that it is failing to load.

Lisa Sandford tweeted: “When will the link actually be working so people can check? First my tumble dryer now my potentially my washing machine. Great work when you have a young baby over Christmas!”