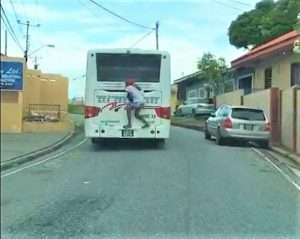 That was how Arrive Alive President Sharon Inglefield described the actions of a woman who was seen in a video hitching a ride on the back of a Public Transportation Services Corporation bus while it was in motion.

The video, which was posted on social media over the weekend, was shot by a passenger of a vehicle behind the bus as it drove through the streets of Arima.

The woman in the video is seen as she took off one of her tee shirts and used it to hold onto the back of the bus.

With her bare feet, the woman gripped onto the back of the bus and held herself steady as the bus was in motion.

She appeared to be ducking below the back window panel, so as not to be seen by the bus driver.

During the minute-long video the woman held on tight as the bus swerved through the streets, and even drove up an incline.

The driver of the vehicle behind said she kept her distance in case the woman fell off the bus and the road.

Inglefield appealed to drivers and pedestrians to be “better behaved” on the roads.

“That was crazy and reckless behaviour. We hope that out road-user population would be better behaved especially at this time of the year, and to reduce incidents of fatalities and serious injuries on our roads”, said Inglefield.