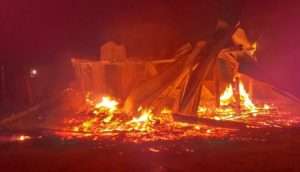 newsroom.gy- Residents in Novar, Mahaicony awoke to the screams of 53-year-old Dularie Lall, a mother of nine whose house caught fire early Monday.

Dularie and four of her children who lived with her were asleep when the fire started and awoke to heat and flames around them.

Dularie and 10-year-old Mahendra Singh, 12-year-old Ashmini Singh, 14-year-old Shri Devi Singh and 28-year-old Karan Singh made it out of the burning house just in time before it collapsed.

The woman’s 30-year-old daughter, Reshma Lall who lives in Airy Hall, a village away from Novar, told the News Room that the fire started at about 3:00hrs and it took about 20 minutes for the wooden structure burn flat to the ground.

The family has been living there for about 23 years. Reshma said they were unable to save anything and they are unsure what caused the fire since the house had no electricity.

While neighbours tried to assist and formed a bucket brigade, there was nothing anyone could have done to save the house.

Dularie received burns on her right hand and hair after she tried going back into the burning building to save what she can.

She was taken to the Mahaicony Hospital where she was treated and sent away. Reshma noted that when the fire service arrived the house was already destroyed.

At the time when the News Room spoke with the family, they were still sitting on the dam in front of the burnt structure.

It has been one year now since Dularie’s husband died and one month since her mother died, both of whom supported her and her children.

The family will be accepting any assistance possible and can be contacted on telephone numbers 600 9937 and 658 4141.