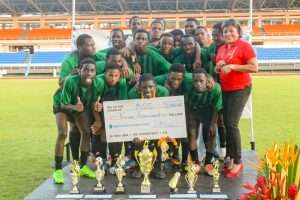 See the results of the four final matches of the tournament, which was streamed live on  T & R Communications

Republic Bank, the proud title Sponsor of the RightStart Cup Youth Football Tournament for the past 16 years, is extremely pleased with the level of participation of the schools in the tournament: Twenty–two secondary schools, including two from Carriacou. Forty-six (46) teams competed in the tournament, seventeen (17) juniors, eleven (11) girls and twenty-one (21) seniors divided into A and B divisions.

Mrs. Shaeen Ghouralal, General Manager – Credit at Republic Bank, who inspected some of the teams before the matches stated “it was gratifying to see the strong school support that rallied behind the teams for each match. Hats off to the Ministry of Sports for co-ordinating the tournament; and the Ministry of Education for sanctioning the time off for the schools of the final 8 teams, to attend the matches.”

The RightStart Cup continues to be a major training ground for the National Squad and Republic Bank is particularly pleased to support this development opportunity for our aspiring Footballers; this being one the premiere tournaments, held under the flagship Power to Make A Difference programme. Annually, approximately $80,000 is invested in the tournament.

We congratulate the winners and thank all the participating schools, as we look forward with great anticipation for the 2020 RightStart Cup Youth Football Tournament.