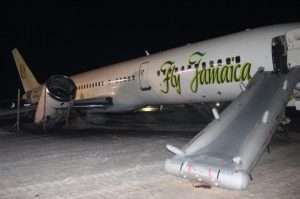 (JAMAICA GLEANER) — Troubled airline Fly Jamaica is seeking protection from creditors as it tries to restructure and stay in business or explore other options, such as a sale.

That filing for bankruptcy protection with the Office of Insolvency was done on October 29, according to Marlon Murdock, the agent for Fly Jamaica trustee Wilfred Baghaloo.

It follows the unravelling of a nascent deal over the summer with a group of investors seeking to acquire the airline from founder Paul Reece.

Murdock told the Financial Gleaner that Fly Jamaica is preparing a proposal for creditors to vote on, which was preceded by a ‘Notice of Intention’ in the press.

“The process now is that since Fly Jamaica has filed a notice of intention, they had an initial 30 days to put together a proposal that they were going to present to creditors, who will then vote on it so that they can either accept or reject,” the agent said.

‘They’ve been given an extension for that initial 30 days so the new date will be January 14, 2020,” Murdock added.

Murdock says the current list is not exhaustive and that the trustee is still ­receiving claims from creditors not on the current roll. He is encouraging all creditors to come forward for a clear picture of the carrier’s indebtedness.

“What we were given by the ­company is a list of creditors that were in existence on the day the company filed. What we want is for those who are creditors to submit claims against the ­company, and they can do that by emailing me,” said Murdock. He and Baghaloo work with PricewaterhouseCoopers Jamaica.

Fly Jamaica has been grounded for just over two years. Since a plane incident in November 2017 when the lone operational Fly Jamaica airplane – a Boeing 757 en route to Toronto from Guyana – skidded off the runway as the pilot attempted an emergency landing at the Cheddi Jagan International Airport, the damaged plane has been languishing at a remote ­section of the airfield.

Prospective buyers of the airline, headed by French acquisition and diversified firm W&L SAS, initially said they planned to get the airline flying again by September, which appeared to be a long shot, given that approvals were needed from the Jamaica Civil Aviation Authority to achieve that goal.

That deal is no longer in play.

Murdock says Reece contacted the team at PwC to say that the prospective buyers were having difficulties completing the ­transaction, and that Fly Jamaica’s debts were piling up in the meantime.

“They weren’t operating so there was no revenue coming in; so they needed some time to put together a proposal,” Murdock said.

“Since they had the accident in Guyana they had a class action suit that was about to be filed against them, so they realised that they needed the time to get something done,” he said of the urgency.

Murdock says if things were allowed to progress, the value residing in the company would likely continue to erode to the detriment of some creditors, when the holdings were eventually liquidated.

“Most likely, the creditors would end up getting less than they would get that if the company had time to put together a proposal which would likely include finding new investors to pump some funds into the company,” Murdock said.

“Recognising that they needed that time to put together that ­proposal – and they asked us to act as trustees – our role is really to guide in helping them to prepare the proposal and to assist them when they have to negotiate with investors,” Murdock said.

He adds that if the airline is to fly again, it will need new capital injection.