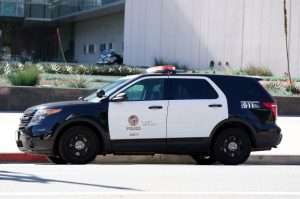 David Rojas, 27, was charged with having sexual contact with human remains without authority, according to a statement from the Los Angeles County district attorney’s office. He could face up to three years in state prison if convicted.

Rojas and his partner had responded to a report of a woman having died at a home on Oct. 20. Rojas is accused of touching the woman’s breast while he was alone in the room with the corpse, the DA’s office said.

Police officials conducting a random inspection of the officer’s body camera videos found the incriminating footage, according to a person briefed on the incident. The person wasn’t authorized to publicly discuss the case and spoke to The Associated Press last week on condition of anonymity.

The officer had disabled the body camera but the act was caught on video when he turned it back on, the person said, because the devices have two-minute buffering periods to capture what happens right before they are activated.

Rojas was released from jail on a $20,000 bond Thursday, according to a Los Angeles County Sheriff’s Department inmate locator website.

It was not immediately clear whether Rojas had an attorney who could speak on his behalf. The Los Angeles Police Protective League, the union that usually provides legal counsel for its members, said it won’t defend Rojas.

“We hope that District Attorney Jackie Lacey charging Mr. Rojas for his vile alleged crime will bring some solace to the deceased woman’s family during their time of grieving,” the union’s board said in a statement. “His alleged behavior is abhorrent and an affront to every law enforcement professional working for the LAPD.”