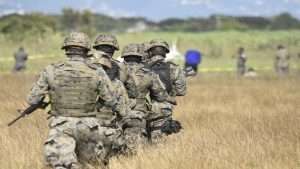 loopjamaica.com- A former member of the Jamaica Defence Force (JDF) has lost his appeal against his conviction for the murder of his mother-in-law in Bryant’s Hill, Clarendon six years ago.

Wilbert Pryce was charged and later found guilty of the shooting death of 45-year-old Maxine Fearon. She was killed at her home on February 24, 2013.

Pryce was later sentenced to life imprisonment with a stipulation that he should serve 25 years behind bars before being eligible for parole.

Evidence was given at the trial in the Clarendon Circuit Court that at the time of the incident, Pryce and his wife had separated, and she was staying at her parents’ home.

Allegations are that about 7pm that night, Pryce, armed with a gun, went to the house, where his father-in-law saw him sitting before the dwelling with the gun in his hand.

Pryce’s father-in-law called out to his wife, who was inside the house, telling her not to open the door, and to call the police.

A dispute later developed between Pryce and his father-in-law, during which Pryce knocked him on his head, causing it to bleed.

Raising an alarm, the father-in-law then fled the premises.

A witness testified that Pryce then fired shots inside the house, hitting Fearon in the chest.

The police were alerted and Fearon’s body was found in a pool of blood in the living room of the house. There was a machete on the floor close to the body.

Injuries were observed to the left shoulder and right side of the back. The pathologist would later confirm that these were gunshot entry and exit wounds to the body, and that the Fearon had died as a result of an accumulation of blood and air inside her chest cavity.

Three live rounds of ammunition, two expended bullets and a spent bullet casing were found in the area of the crime.

Pryce, at his trial, gave an unsworn statement in his defence, that he was attacked by some men when he went to the house to give his wife money for their children.

Following his conviction, Pryce appealed on the grounds that the presiding judge failed to give adequate direction to the jury that he could have acted in self-defence.

The Court of Appeal, however, found that the judge’s directions to the jury were sufficient in the circumstances of the case, and the sentence that was imposed was appropriate.

“We have, accordingly, come to the conclusion that the application for leave to appeal against the conviction must be refused. No argument was addressed to us on the question of sentence and, in our view, the sentence imposed by the judge was well within the usual range of sentences for like offences,” the Appeal Court judges stated in their written judgement.

“We therefore dismiss the application for leave to appeal, and order that the applicant’s sentence is to be reckoned from 18 May 2016,” the appeal panel added.