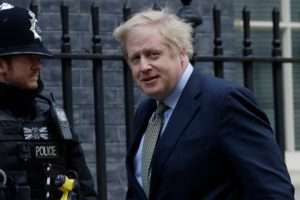 Johnson and the Tories had captured at least 358 seats in the House of Commons, with the Labour Party — led by leftist Jeremy Corbyn — projected to take few more than 200.

Johnson declared the vote “historic” in a victory speech early Friday as it became clear the Conservatives would win a majority of seats.

“That gives us now, in this new government, the chance to respect the democratic will of the British people to change this country for the better and to unleash the potential of the entire people of this country,” he said.

Corbyn announced in his own speech early Friday that he would not lead his party in a future general election but continue to serve as a member of Parliament.

“I will discuss with our party to ensure there is a process now of reflection on this result and on the policies that the party will take going forward,” Corbyn said soon after being elected to his 10th term as an MP.

The Conservative victory means the UK will likely complete long-stalled exit negotiations with the European Union, as Johnson campaigned on a “get Brexit done” platform.

The prime minister said in his remarks after the election that the results provide the Tories with a “mandate” to move forward with Brexit.

“It does look as though this One Nation Conservative government has been given a powerful new mandate to get Brexit done,” he said.

Johnson claimed during the campaign that if the Tories were victorious in Thursday’s contest — called two years ahead of schedule — he would finally get Parliament to approve a Brexit deal with the EU and pull the UK out of the union by Jan. 31.

The results Friday morning show Johnson’s Brexit message resonated with voters across the nation, as Conservatives picked up seats in typical Labour strongholds.