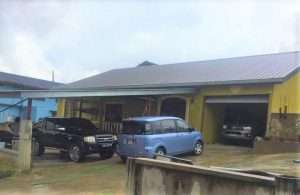 (TRINIDAD EXPRESS) – Criminals forced their way into the home of a 54-year-old mother of two, and put a gun to her head while ransacking the house at Harmony Hall Gasparillo on Wednesday morning.

The victim, Indira Sooknanan, who works from home as a real estate agent, told the Express she was conducting business on her phone when the men came.\

As she is hearing impaired in one ear, Sooknanan said she was not aware that two men had entered through her front gate.

They then knocked on her front door and as she opened it to see who was there, a gun was held to her face. She was pushed inside and told to shut up. The men appeared to be disguised as workers, with one man wearing overalls and carrying a weed whacker.

“They came from the Lady Hochoy School side, they were apparently walking up and down the street before. There was one man of East Indian descent and one of African descent and the East Indian man was wearing overalls and carrying a whacker.” she said.

The men proceeded to tie Sooknanan and took her to her bedroom.

Sooknanan said she was going to be assaulted but they assured her they were only there for the money.

They requested that she showed them her jewelry and money. Overwhelmed and believing she would die, Sooknanan who is a practicing Christian, said she began speaking in “tongues.”

“I am a Christian so I started praying loudly and calling on the name of Jesus. I started to pray in tongues and they were very annoyed by it. They kept telling me to shut up and the guy with the gun told me he would kill me if I didn’t shut up so I started to quiet down and mumble my prayers.” she said.

The mother of two children was then left in her bedroom as the men searched her house, eventually taking jewelry, electronics and her car. Seeing a chance to escape as they were busy, she crawled to her bedroom door but was met by one of the suspects.

“He put the gun to my head again and told me he was going to kill me. They tied me up tighter than before and I really thought that they would kill me. I waited until I was sure that they left and I went out again.” she said.

The police were contacted by Sooknanan and after paying a visit to her house, she said officers told her she would have to visit the Gasparillo Police Station to make a formal report.

People who saw the men enter her yard thought they were labourers due to their attire.

Sooknanan, who has lived in the house with her family for two years, said she was not afraid of death but is very happy to have been spared. “I am not afraid of death because I know I would have gone to meet Jesus. However this is not an easy thing, it’s a very traumatizing thing to have happen to you.” she said.

An officer of the Gasparillo Police Station told the Express that the case was being investigated.