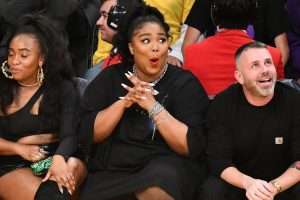 LOOP NEWS- American entertainer, Lizzo has chosen to speak out after much back lash surrounding her attire a basketball game.

The “Truth Hurts” singer made a stir after sitting court-side for the Los Angeles Lakers vs. Minnesota Timberwolves game on Sunday night.

While the Lakers Girls performed to her song “Juice,” she twerked along to her track, revealing that she was wearing a cut-out T-shirt dress that showed off her rear end. Underneath the dress, Lizzo wore a pair of fishnet tights and a black thong to match.

Footage of the moment was captured and immediately shared on all over the internet.

Some people online thought the moment was funny, while others thought she was doing just a bit too much.

Lizzo is known for promoting body positive messages for full-figured women as well showing off her curves on social media, but following Sunday’s game, the public has asked her to tone it down.

On Monday, she took to her Instagram live to talk about the release of her music video for her single “Good As Hell,” and while expressing her happiness she decided to address her critics.

However people are still split over how to feel about the Singer’s actions.