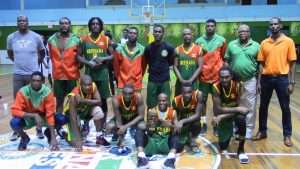 newsroom.gy- Guyana turned in a dominant performance at the weekend to clinch the three-match Goodwill basketball series with Grenada 3-0. The Guyanese completely outplayed the visitors, winning by comfortable margins at the Cliff Anderson Sports Hall.

On Friday night, the 2018 Caribbean Basketball Confederation champions inflicted a 90-73 defeat on the visitors with Ray Victor scoring a game-high 39 points, Terron Welch 19 and Travis Belgrave 18.

James Andrew with 17 and Jonathon Williams with 15 were the leading scorers for Grenada.

In game two on Saturday, Guyana emerged with a 97-76 victory to close out the series with Welch scoring 28 and Victor 18. Again, the top points men for Grenada were Williams with 26 and Andrew 15.

Game three on Sunday night saw Guyana sweeping the series with a 97-73 success. Victor was again on the scoresheet, hitting 17; Nikkoli Smith had 16 and Belgrave 15.

For the Grenadians, Williams again led the way with a game-high 18 points.

At the pre-series press conference last week, President of the Guyana Amateur Basketball Federation, Michael Singh, cited the need for more goodwill series in the Caribbean as the new year presents a busy schedule for teams.

This, he pointed out, will allow countries to gauge the level of talent at their disposal as they embark on regional competitions.