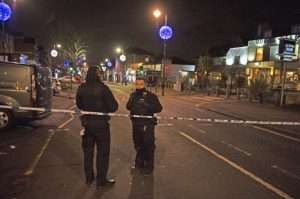 (NEW YORK POST) – A heartbroken British man turned himself into a human fireball in front of his ex-girlfriend who dumped him after only a few weeks together, according to reports.

Horrified witnesses say flames reached at least 15 feet high as the burning man, identified by UK media as Morgan Baskett, 42, begged “Let me die” after torching himself outside a London pub Sunday night.

“He wasn’t even screaming. He was just standing there with his arms out at the side,” witness Djan Ali told The Sun. “When you’re burning, you’d think you’d scream, but he didn’t at all. All he kept saying was ‘I want to die, let me die.’”

Witnesses used extinguishers from the pub and Ali’s nearby cafe to put out the flames and the burned man was raced to a nearby hospital, where he was listed in critical condition Monday.

“His face was completely charred and black. It was so sad to see,” Ali said.

Ali said one of his waitresses, only identified as Michelle, had recently dumped Baskett after dating for just “four or five weeks.”

Baskett confronted her Saturday night because “he wanted to get back together with her but she wouldn’t take him back,” Ali told The Sun.

He saw Baskett “pouring the whole can [of gas] over his head” during the fight with his ex, he said.

“She was desperately trying to grab the petrol can from him,” he told the paper. “There was petrol all over the ground and they both ended up slipping and falling over. I’m not sure if he used a lighter or a match but seconds later he set himself on fire.”

Patrons from the Queen’s Head pub also raced out to help put out the flames, ripping off Baskett’s burning clothes before an ambulance arrived.