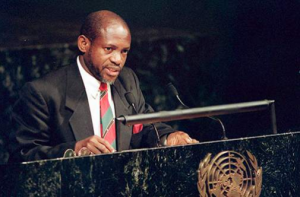 jamaicaobserver.com- ST Kitts-Nevis Opposition Leader Denzil Douglas yesterday denied a report in Britian’s Daily Mail that he was detained at Gatwick International Airport when he tried to leave country with 70,000 pounds in cash.

Douglas, a former prime minister of St Kitts, said in a release that the Daily Mail story “is totally false, malicious and libellous” as he “was never detained or arrested in London”.

He added: “The one-term Government of Dr Tim Harris seems to have found a reporter in the Daily Mail to push their false and libellous story to distract from our call that Minister of Tourism Lindsay Grant and Culture Ambassador Jonel Powell must resign now.”

“Let it be known that, and I again emphasise, that I was never detained or arrested at London Gatwick Airport on 16th November or at any other time. I have committed no crime and I’m under no investigation,” said Dr Douglas.

Dr Douglas, national political leader of the St Kitts-Nevis Labour Party, said the article in question is receiving the attention of his lawyers who will advise him accordingly