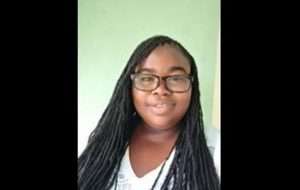 (JAMAICA STAR) – In August, Latoya Hogarth, 28, had a brain aneurysm. She claimed that doctors declared that her situation was unfixable and gave her three days to live. However, four months later, the Lilliput, St James, resident is alive and well, drowning in medical bills.

“I went into the Falmouth Hospital the last week of August with a brain aneurysm. They took me there and Falmouth could not do anything for me, and so they sent me to Cornwall Regional Hospital and they said that they had to observe me. They put me in a back room and they gave me three days to live,” Hogarth said.

A brain aneurysm refers to a bulge in a blood vessel in the brain. If the vessel busts, the patient could die. Despite the diagnosis, Hogarth said that her sister, Audra, was not prepared to give up on her.

“They told my sister to call everybody … call the family members so they could say goodbye. My sister did not want to hear that, and so she took me to The University Hospital of the West Indies,” Hogarth said.

Her older sister, Audra, told WEEKEND STAR that she couldn’t accept what the doctors had said. She was adamant that there was more that could be done to save her sister, who was training to become a customer, service agent.

“I just couldn’t accept that there was nothing that could be done. I couldn’t accept that, and I just wanted to try my very best to make sure that every single possibility was explored. I was the one that called the family to say, ‘Listen, the condition is serious. This is what it is, and we know that these are the possibilities,” she related.

Hogarth had emergency surgery at The UHWI on August 27.

Since then, the 28-year-old has been recovering. She feels pain whenever someone touches her head, and she has been having trouble recollecting the last three months of her life. She is also drowning in expenses as she still owes for the medical procedures.

“The bills are just piling up on us. I came out in September and I had to go back in October again because I got a stroke. The surgery costs $1.4 million. I don’t have that kind of money, so if you could help me, that would be great. I do not want to ask, but please, any help that you can give would be greatly appreciated,” she said.