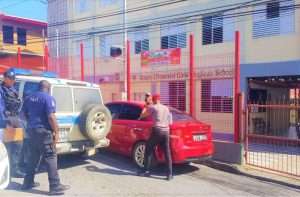 trinidadexpress.com- PUPILS of the Anstey Memorial Girls’ Anglican School in San Fernando screamed in horror as gunshots rang out near their school on Thursday morning.

A man with a firearm discharged three rounds at Drayton Street where the school is situated.

Classes were in session at the all-girls school when around 9.15 a.m. the gunshots were heard.

The children screamed for several minutes, but the teachers and principals kept them in their classrooms and calmed them.

Classes continued and within minutes several police units with some 20 police officers of the San Fernando CID, and Southern Division Task Force responded.

With police officers manning the streets, the pupils had recess around 10 a.m. and were allowed into the school yard for the break.

The school’s principal declined to comment to the Express.

Police were told that around 9.15 a.m. the gunman saw his target walking south along Drayton Street, and fired behind him.

The targeted man ran off and escaped in the adjacent streets.

Police suspect that the shooting was a reprisal for the killing of Clint Bhagwandeen, who was shot dead on Saturday night.

Bhagwandeen was gunned down mere metres away from the office of the Homicide Bureau on Coffee Street.

Clint Bhagwandeen, 30, of Olera Heights, was shot multiple times and died at the scene.

The shooting occurred around 9.30 p.m. when Bhagwandeen was liming at D/UP LQ Lounge.

Witnesses told police that earlier that night Bhagwandeen had an altercation with another man.

The man allegedly told Bhagwandeen that he was returning to ‘shoot up the Coffee’.

Bhagwandeen was liming in the outdoor seating area of the roadside bar with other people when he was shot multiple times.

The killer ran off and escaped.

Police said they have information on the suspect.

They said that Bhagwandeen had a pending case in court for a firearm-related offence.

His family declined to be interviewed when contacted by the Express.