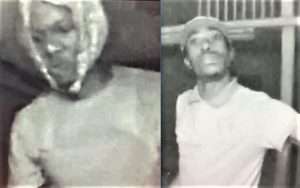 trinidadexpress.com- St James police are investigating a report in which an 85-year-old woman and her son were beaten during a home invasion on Tuesday.

No serious injuries were reported in the incident, but the two victims were taken for medical treatment.

In a social media post, the Woodbrook Residents’ Association recounted the event and posted pictures of the alleged suspects, asking anyone with information as to their identities to contact the police.

The group said the men hit the elderly woman on her head and choked her, causing broken bones.

“We would like you all to have a good look at the images below. These ‘men’ broke into a house on Ariapita Avenue to commit a robbery. They viciously attacked an 85-year-old woman and her amputee son. These ‘men’ were particularly violent with the 85-year-old woman as she was hit in the head with a gun butt, choked, (and suffered) cuts and broken bones. Please share these images so we can have these ‘men’ where they belong… in jail,” the post read.