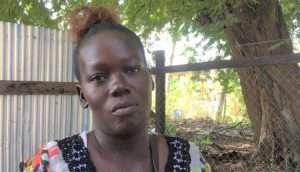 newsroom.gy- A 37-year-old mother of five is in a distraught state following the death of her newborn baby boy whom she named Malik Murret Hacket.

Seleta Thomas of Brighton Village, East Berbice Corentyne told the News Room she was admitted to the New Amsterdam Hospital on November 13 and gave birth to a baby boy the next day.

The baby, however, died the following day – November 15 – and the doctors told her that it was because of damage to the brain but a post mortem on November 18 revealed that the cause of death was due to liver damage.

The distraught mother said she had a healthy pregnancy and is at a loss as to what happened.

She accused the hospital and the doctors of negligence.

“After a few hours after I start feeling contraction, my water bag burst. I told them my water bag burst and the midwife told me –‘Thomas yuh pee up your skin, your water bag nah none burst’ – so I said nurse I get five children I know what it means when my water burst,” Thomas said.

Thomas said she asked the hospital to perform a caesarian because she did not feel strong enough to go through a normal delivery.

Thomas said the hospital administered a tablet to induce labour.

During labour, Thomas said the nurses reportedly noted that the baby was too big for a regular birth and she should have been given a C-section.

After the baby was born, Thomas said doctors informed her that as a result of damage to the brain, he would not be able to walk or develop as a normal child.

The one-day-old baby boy was kept on oxygen in an incubator until he died.

Thomas believes that the hospital is seeking to cover up the incident as she noted that they refused to give her any of the medical records when she requested them.

The mother said she took a while to come forward with her story because the death of her son took a toll on her health.

She wants justice and is calling on the Public Health Ministry to investigate the New Amsterdam Hospital.