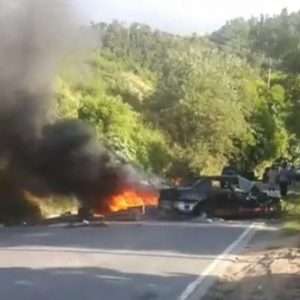 stlucianewsonline.com- Uncertainty spread across Dominica on Wednesday morning as civil unrest continued unabated across the island.

In Newtown, the only main road connecting the south to the rest of the island was blocked but it was cleared by the police on Wednesday morning.

In Marigot a huge bonfire in the middle of the road was kept burning over night.

Several schools in the capital Roseau, many in the middle of exams, were affected.

Students were sent home as teachers could not make it to administer the exams.

SNO understands 150 officers from the Regional Security Services (RSS) arrived in Dominica in the wee hours of Wednesday morning to assist local police.

The protesters are calling for electoral reform in Dominica ahead of general election slated for December 6.

Many of them have vowed to die for their cause.

As events unfolded across the island of Wednesday many Dominicans were left wondering what was going to happen next.

Some argued that the protesters were taking matters too far and should cool down their tempers.

Others supported the protesters saying burning issues in Dominica have been taken for granted for too long.

Some blamed the opposition United Workers Party which had taken the side of calling for electoral reforms on the island.

Still others blamed Prime Minister Roosevelt Skerrit for failing to implement reforms despite recommendations made by a joint OAS, CARICOM and Commonwealth mission to the island.

The protests are a continuation of what has been taking place since the election date was called.

Some of them have already turned violent with protesters clashing with police, such as what took place in Marigot on Tuesday.