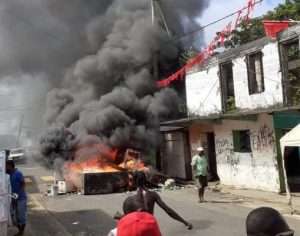 (SNO) -The police in Dominica have reportedly fired live ammunition and tear gas in the community of Marigot in Dominica on the second day of protest for electoral reform on the island.

On Monday, residents in the area blocked the road stranding scores of people traveling to the airport and other pedestrians.

However, Tuesday turned out to be the worst day of protest with police firing tear gas and bullets in a bid to keep the area under control.

“We have police shooting live ammunition and the people of Marigot continue to stand and resist oppression …” Brian Linton, the brother of opposition leader Lennox Linton, told the media.

He added, “We are demanding free and fair election, reform, and a clean voters list in the first instance.”

He said the people will not be backing down.

Videos and photos circulating on social media show tear gas canisters and bullet casings, which protesters said were fired by the police.

Dominica is in the grip of political tension as general election, slated for Friday December 6, draws near.

Civic groups and the opposition United Workers Party (UWP) have been calling for electoral reform. They said the current electoral system gives an unfair advantage to the ruling Dominica Labour Party.

A number of recommendations for reform were given by a joint OAS, Commonwealth and CARICOM mission to Dominica but they have fallen on deaf ears.

The protesters have been calling on the DLP administration to clean up the voters’ list, issue voter identification cards, regulate campaign finance and grant equal access to state media resources to all political parties.