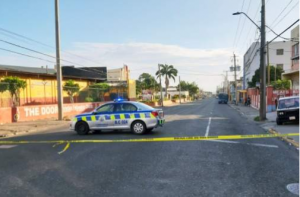 jamaicaobserver.com- AFTER spending three years behind bars, Dishane Dixon’s first taste of freedom was short-lived, as he was shot dead on Slipe Road in Kingston, one hour after his release.

The 23-year-old, who had been in lock-up at the Horizon Adult Remand Centre on a shooting charge, had just taken up his bail at the Supreme Court at 2:30 pm. However, while on his way home with his mother and another individual, he was shot four times in the head. The shooting incident took place at approximately 3:30 pm.

Dixon’s mother, who was driving the motor vehicle in which he was travelling, said they had just left the Supreme Court on King Street in downtown Kingston, when her youngest child was killed.

“It come like me have fever right now,” Dixon’s mother told the Jamaica Observer as she sat on the side of the road just below the Courts Super Store yesterday afternoon.

“Him just get bail and him call me and seh mi fi come pick him up. So mi pick him up and mi drive come straight up. As me reach deh suh, a taxi man stop right in front of me and I was saying, ‘Why you don’t drive up the car?’ in a mi mind. And then mi hear boom, and mi hear bow, bow, and him get four shot inna him head,” she recounted, adding that Dixon had been sitting behind her in the motor vehicle.

“When [it happened] mi deh pon, ‘Jesus, Jesus, Jesus’, and [the gunman] run back to the car. I don’t see the licence plate or nothing…we run out a di car and then we go back inna di car,” the mother said, adding that she was shown a police vehicle, which she drove towards and sought assistance.

The mother, who believes they were followed from the Supreme Court, said her son was taken to hospital where he was pronounced dead.

Admitting that Dixon had been shot eight times five years prior, and was also acquitted of murder, the mother said she had made preparations for him to leave Spanish Town, St Catherine, where he had been living before incarceration.

“I told him that I was getting him into the school at Half-Way-Tree, so him can change up him life. So I was going to take him home,” the mother said.