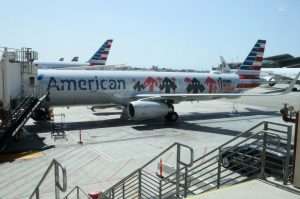 A Florida woman faked a medical emergency in order to get a larger seat on an American Airlines flight, authorities said.

But the pilot, apparently not realizing the emergency was bogus, turned the plane around.

The woman, who wasn’t publicly identified, was taken into custody when Miami-bound flight American Eagle 3508 landed back in Pensacola around 6:30 a.m. Friday, police said.

“The pilot declared an emergency… once they got on the ground, she made it clear that she was faking the medical condition to get a bigger seat,” Pensacola Police Department spokesman Mike Wood told NBC 6.

Once the plane was back on the ground, the woman continued with the theatrics, refusing to get off the aircraft, cops said.

The pilot, law enforcement and medical personnel eventually succeeded in getting her off the plane.

The woman was taken into custody under the Sunshine State’s Baker Act, which allows authorities to hold a person who could be a threat to themselves or others.