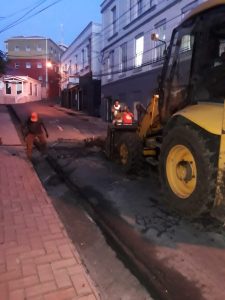 St. George’s Grenada – The National Water and Sewerage Authority (NAWASA) was forced to institute a shutdown of its Annandale Water Treatment Plant on the weekend to address several major leaks on its distribution network.

Within hours on Friday November 29th 2019, broken mains were reported in Tempe, Beaulieu, Archibald Avenue, along Scott and Young Streets, in the Town of St. George and Belmont.

The shutdown, which can only be described as unprecedented and affecting consumers from Annandale, Constantine, New Hampshire through to River Road and the entire south of the island, saw crews working throughout the night on Friday and into the weekend, to repair nine (9) broken mains; ranging from 4 to 12 inches in various areas along the Annandale distribution network.

Head of the Transmission and Distribution Department (T&D) Mr. Ernest Bruno, while apologizing to the affected consumers, noted that it was a most challenging experience for his team. “We had broken mains at Tempe, we had approximately four in the Town of St. George, one at Belmont and two along the Mt. Gay/Beaulieu road”.

The Annandale Water System was reopened on Saturday November 30th, 2019; however, some customers continue to be challenged by a lack of water supply. According to Mr. Bruno “because of the various elevations, everybody will never receive water at the same time. The system was reopened since around 12:00 noon on Saturday; however, most of the persons at the higher elevations will not receive water until the system is completely recharged”.

According to the T&D Head, this unusual occurrence highlights the need for a total distribution network upgrade to ensure a more reliable and adequate water supply to consumers. Something like this he says, only occurs in a disaster “I think this lends a lot to what I call the hydraulic and hydrostatic integrity of our lines. Our lines are worn, they are old and they are weak. They cannot sustain any increase in pressure, which may be required to send water to the higher points”.