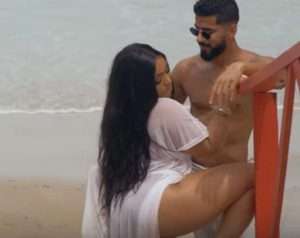 trinidadexpress.com- It seems soca songtress Destra Garcia is living up to her moniker as the ‘Queen of Bacchanal’ after her latest music video, “Me Gusta’ left some fans in a rage.

The video, which has received mixed reviews from the public – with many not seeing what all the fuss is about had others thinking the title of the song should be ‘No Me Gusta’.

On Wednesday, Khan released a video in which he appealed to people to stop making negative comments on social media and to respect his family’s privacy.

He admitted that Garcia showed him the final cut of the video, which he approved.

However, since the video’s release, Khan said he did not realise it would have been too much for his family.

Khan’s video came not too long after his friend and fellow cricketer Dwayne Bravo posted a video on social media apologising to Khan’s father, who was upset over his son’s appearance in the video.

He said, “The singer is a very good friend of mine and because of the love people of Trinidad and Tobago have for Ali she requested if he could have made an appearance in her music video, which Ali was okay with. The video did not come out the way Ali wanted it, and he shared his concern with me, and told me that you are very upset and the family are disappointed in him.”

Bravo, who connected Garcia with the cricketer, acknowledged his involvement and asked the Khan family to forgive Ali.