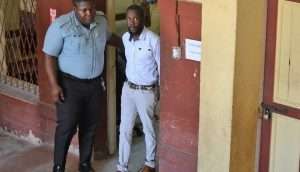 Hodge of Mocha, East Bank Demerara was on trial before Justice Simone Morris-Ramlall at the Georgetown High Court.

Hodge was remanded to prison until his sentencing slated for December 12, 2019.

Following the verdict, Social Worker Simon Gaskin read the victim’s impact statement to the court and detailed how the incident affected her.

“I wanted to kill myself,” the victim said as she recounted the first time Hodge raped. After the first incident, the young lady said she started to cut herself.

The second time Hodge raped her, the victim said that she told her friends but begged them not to tell anyone.

She said he continued to rape her every time he picked her up from school.

In her statement, the victim lamented that her mother continues to support Hodge and believes that he is innocent of the crime.

The teenager said she told her mother about the rape but she did not believe her and Hodge continued to rape her.

Hodge was arrested after the teenager told other relatives.