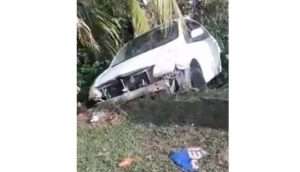 newsroom.gy- A seven-year-old student of the Latchmansingh Primary School, West Coast Berbice (WBC) lost his life after he was struck down by a motorcar and died instantly.

The incident occurred at approximately 16:00 hrs at Bush Lot WCB.

The News Room understands that the child was standing at the side of the road with his mother and other siblings when the car crashed into them and landed in a nearby trench.

The little boy was trapped beneath the front bumper of the car and in order to remove his body, public-spirited persons had to rip off the bumper.

The child was still wearing his backpack from school.

Villagers who gathered at the scene were in left in a state shock and disbelief at the horrific accident.

The victims, including the driver of the car, were rushed to Fort Wellington Hospital but due to the severity of the injuries, they are being prepared for transfer to the Georgetown Public Hospital.

It is reported that the driver was speeding and lost control of the car when the accident occurred.

The News Room will provide more information when it becomes available