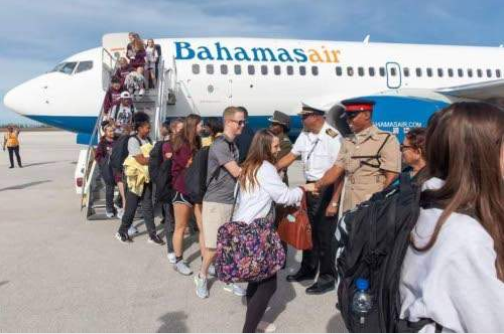 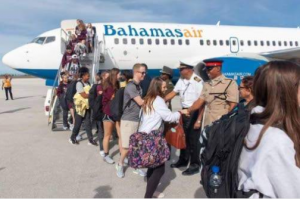 They were met on arrival by representatives from The Bahamas Ministry of Tourism & Aviation (BMOTA), Grand Bahama Island Tourism Board, Grand Bahama Airport Company, Bahamas Customs and Immigration, and the Royal Bahamas Police Force.

“It was important for us to welcome this first commercial international flight since Hurricane Dorian. Every opportunity to put heads in beds in Grand Bahama is more important now than ever,” said BMOTA general manager for Grand Bahama, Steven Johnson.

“Also, we didn’t want to disappoint the stude

nts and families who look forward to competing in The Bahamas every year, and we felt that this year was particularly important for the local students and families.”

Hurricane Dorian slammed into two islands of the archipelago on September 1, killing at least 65 people and leaving damage estimated at more than seven billion US dollars. In addition, several people are reported missing in the storm that severely hit Grand Bahama and Abaco Islands.

Tourism officials say that four out of the five visiting teams competing in Tabernacle Baptist Christian Academy’s four-day tournament this week arrived on Tuesday and that the remaining team was expected here yesterday aboard Bahamas Paradise Cruise Lines’ Grand Celebration.

Every year, the teams arrive via chartered flight to the island, but this year marks the first time The Bahamas’ national flag carrier, Bahamasair, has provided this service.

The flight was made possible, in large part, through the efforts of Tabernacle Baptist Christian Academy Principal Norris Bain, who reached out to various government officials to assist with securing travel arrangements for the visiting teams.

“As a Grand Bahamian, I feel really, really proud to have been a part of the first international flight to hit the island since Dorian. That really gave me a great sense of pride,” Bain said, adding that, as a result of the tournament, some 200 guests will be on the island, making a direct and positive impact on the local economy.

“There’s so much more we can do on this island. I’m not going to be one of those on the side complaining. I’m going to try to partner with the Ministry of Tourism, if they’ll let me, and try to bring more events to our island and try to see if this will be the first of many flights to come to Grand Bahama,” he added.