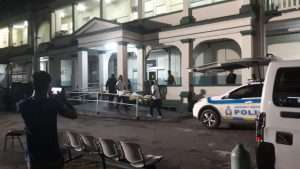 trinidadexpress.com – The patient shot and killed on Ward 3 of the Port of Spain General Hospital last night was not the intended target.

The victim, Dejean Broker, 25 of Hillview Terrace, Laventille and he had been taken to the hospital and warded since last week after being chopped during an altercation in St James.

At around 8.45 p.m. a man dressed in white overalls walked into the ward located on the north side of the hospital compound.

Police said the gunman looked around, found who he thought was his target and opened fire hitting Broker ten times, killing him. No-one else was injured.

Police said that panicked nurses ran out of the ward while the gunmen left.

Two women who police said were relatives of Broker visited the hospital.

When approached by the Express last night they had no comment.

A third woman said she was a close relative of the intended target.

She said that he had complained to her earlier last night that during the day yesterday two men visited him on the ward and he told her that they wanted to kill him at that time.

She said that her relative “start to get on and make real noise,” following which the two men quickly left the ward.

She said that he had been shot last week and, “people,” have been sending threats ever since.

The Express was also told that some of the nurses told their management last that they will not work on that ward unless there are armed police officers present.

Management will be meeting with nursing staff today to discuss the issue.

Patrols by the hospital’s private security and the police were heightened in the hospital and the streets surrounding the hospital last night as the friend of the intended target said: “Them fellas have real belly. When they realize they killed the wrong man them fellas will come back”.