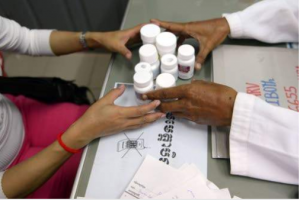 (CMC) — A new report has found that across the Caribbean, progress has been made in reducing new infections and AIDS-related deaths, but these gains appear tenuous.

The report, titled Communities at the Centre — The response to HIV in the Caribbean, has been released ahead of World AIDS Day 2019 on December 1 with the theme ‘Communities make the difference’.

According to the study, national responses are highly dependent on donor funding, especially for programmes focused on key populations.

The study noted that the financial resources available for HIV responses in the Caribbean have fluctuated over time, reaching the same level in 2018 as in 2010.

In total, US$326 million was available for the Caribbean’s HIV programmes in 2018, considerably less than the US$600 million needed to achieve its Fast-Track Targets by 2020.

The availability of domestic resources for the HIV response increased by 69 per cent during this eight-year period, reaching 27 per cent of the total resources for HIV in the region. International donors decreased their share from 84 per cent in 2010 to 73 per cent last year.

During that period, bilateral contributions from the United States Government increased by 13 per cent, while disbursements from the Global Fund to Fight AIDS, Tuberculosis and Malaria (the Global Fund) and all other international sources decreased by 32 and 91 per cent, respectively.

It said access to evidence-informed combination prevention services varies markedly, and scale-up of these services is needed, including increased investment in community programmes, pre-exposure prophylaxis (PrEP) for individuals at high risk of HIV infection, and assisted partner notification following an HIV diagnosis.

“Many people living with HIV are diagnosed several years after they acquire the virus. Innovative testing strategies are required to reach those who have never been tested and to increase early diagnosis. In 2018, progress towards the second 90 (90 per cent of people who know their HIV-positive status are accessing treatment) has stalled in the region due to slowing treatment uptake”.

The publication also notes that discrimination against people living with HIV and key populations is a “formidable barrier” in the Caribbean, often fuelled by a lack of knowledge of HIV and human rights.

“Furthermore, there is little information on key populations; national health information systems should be strengthened to collect data to guide and monitor services for these populations. Rates of intimate partner violence experienced by women also are high in countries that report these data.

“The region has made great strides towards the elimination of mother-to-child transmission, with Cuba being the first country to reach elimination in 2015; an additional six countries and territories reached that target in 2017. Cuba has since been re-certified.

“Treatment coverage among pregnant women living with HIV increased from 75 per cent in 2017 to 86 per cent in 2018, but programmes must be further scaled up to ensure elimination of mother-to-child transmission of HIV, syphilis, Chagas disease, and perinatal hepatitis B.”

Figures released show that an estimated 16 000 people acquired HIV in the Caribbean last year, 16 per cent fewer than in 2010.

Belize is the only Caribbean country to have recorded an increase in HIV incidence between 2010 and 2018.

“All other countries reported declining incidence, with the decline in The Bahamas and Cuba exceeding 20 per cent. There has been a 38 per cent decrease in the annual number of AIDS-related deaths since 2010, with 6,700 deaths in 2018.”

The region’s incidence-prevalence ratio continued to decrease slowly, reaching 4.6 per cent in 2018.

Key populations and their sexual partners accounted for nearly half or 47 per cent of new HIV infections in the region in 2018, including nearly one quarter or 22 per cent among gay men and other men who have sex with men, and five per cent among transgender people.

The study notes that median HIV prevalence was 18 per cent among transgender people and nine per cent among gay men and other men who have sex with men.

Data were available from six countries in the region on the population size of sex workers, gay men and other men who have sex with men, transgender people or prisoners. Five of those countries had a national population size estimate for at least one key population.

The publication states that progress along the HIV testing and treatment cascade in the region has slowed. It said of the estimated 340,000 people living with HIV in 2018, at least 72 per cent knew their status, 55 per cent were on treatment and 41 per cent were virally suppressed.

In 2017, treatment coverage and viral suppression among people living with HIV were 54 and 40 per cent, respectively. Viral suppression among men was lower than among women in nearly all of the countries in the region with available data, highlighting an acute need to improve services for men.

It said one of the challenges impeding treatment initiation is late diagnosis. In 2018, five of 12 countries reporting data showed that 50 per cent or more of newly diagnosed cases presented with CD4 counts less than 350 cells per mm3.

In 10 of 13 countries providing data, more than 20 per cent of people living with HIV presented with advanced HIV disease (CD4 count).