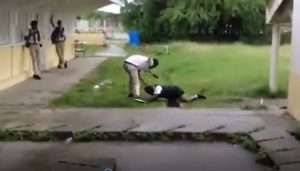 newsroom.gy-The Ministry of Education has launched an investigation in the physical assault of a female student by a male pupil which occurred at the Richard Ishmael Secondary School.

The beating, which was caught on video, went viral on social media, prompting the Ministry to intervene. Minister of Education Nicolette Henry spoke with reporters Wednesday about the incident.

“Students fight, there is nothing unusual as you would know, you have gone to school and we all would have saw,” the Minister said.

The Minister said that the Welfare Department has already commenced the process to address the issue.

“There is standing operations procedure and they will address that and if need be to be any feedback to the public based on the fight I am certain my officers would be happy to provide that feedback,” the Minister said.

The video shows the male student pinning the young lady on the ground while he repeatedly punched her in the head and other parts of the body as other students look on.

It is not known what prompted the brutal beating or when it occurred.

Students in both primary and secondary schools have been subject to bullying in schools recently.

The Minister said that bullying is a social ill and affects young people in and out of school.