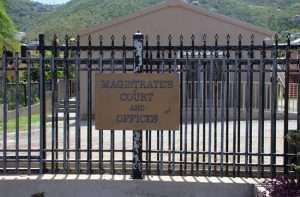 (BVI NEWS) – A 46-year-old handyman from the Dominican Republic has been granted $40,000 bail after he allegedly molested a 10-year-old girl.

Charged with two counts of indecent assault is Rafael Sabino, who resides in Vanterpool’s Estate at East End.

He did not enter a plea when he appeared before Magistrate Christilyn Benjamin on Tuesday.

The court heard that on November 19 this year, the said 10-year-old — who is a friend and schoolmate to the accused man’s daughter — accompanied Sabino’s daughter to his home to have lunch.

During that time, his daughter left the complainant and went into the kitchen to heat their lunch in the microwave. The court heard that, while his daughter had left the room, the accused man allegedly kissed the 10-year-old friend on the lips.

After they had lunch, the daughter asked the accused to drive them back to school.

The complainant reportedly stated that she was afraid and did not react. The accused man reportedly stopped when they arrived near the school, the court further heard.

When the young girls returned to school, they reportedly started arguing because the complainant informed her friend of what allegedly transpired.

The school authorities eventually became aware of the matter and it was reported to the police.

In the meantime, the court further heard that the 10-year-old’s mother said that sometime later she met the accused man sitting on her stairway where he allegedly told her that he had done something wrong and apologized.

The accused allegedly admitted to her that he had grabbed her daughter’s legs but denied grabbing her vagina or kissing her inappropriately.

The accused then asked for her mother’s forgiveness and said it was a mistake.

I was having a bad day

During a cautioned interview with police on November 22, the accused said on the day in question, he was having a bad day and remained home drinking alcohol.

He said he then drove the girls to school upon the request of his daughter. When the allegations were put to him, he did not deny them but stated that he was not feeling well because he was inebriated and therefore was unable to recall what transpired.

After hearing no objections from the Crown for bail, Magistrate Benjamin offered the accused bail with one surety.

He was ordered to stay away from the minor in the matter, surrender his travel documents and report to the East End Police Station every Monday and Wednesday between 6 am and 6 pm.

His matter was then adjourned to January 27. He is currently unrepresented.