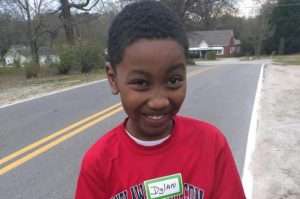 NEW YORK POST- A South Carolina fifth-grader was accidentally shot by a 10-year-old pal, who then dumped his friend’s body near a school bus stop, authorities said.

Children getting off a bus found the victim’s body.

The boys were home alone when the friend took out the weapon kept hidden under a mattress by another household member, according to the Lancaster County Sheriff’s Office.

“The boys were playing in the living room of the home, and the pistol discharged one time while the child who lived in the home was handling it,” authorities said. “The victim was struck and was immediately incapacitated.”

Deputies said the friend then carried Dylan out of the house and left his body on the ground.

Dylan was brought to the Medical University of South Carolina-Lancaster Medical Center, where he died, WBTV reported.

The friend’s parent, whose name wasn’t released, was charged with unlawful neglect of a child in connection with the Nov. 15 incident, authorities said.

Local Sheriff Barry Faile said authorities are working to determine whether Dylan’s friend will face charges in the case.

“This was a heartbreaking and tragic loss for the family of this 10-year-old victim, and everybody who knows about this case including all the officers who have and continue to work on it have been affected by what happened,” Faile said in a statement. “Although we are confident in the basic facts of this incident, this is an ongoing investigation.”