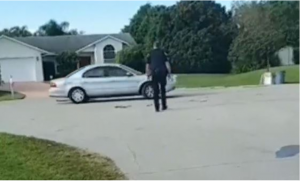 Sky News– A dog accidentally put his owner’s car in reverse – and ended up going around in circles for an hour.

Max the black labrador was locked inside the grey sedan during the incident in a cul-de-sac in Port St Lucie, Florida.

His owner had briefly stepped out of the car after she made a wrong turn, and moments later, the dog was on the move.

The car hit a postbox and took out a rubbish bin as police tried to figure out how to open the car.

Although the owner had handed officers an extra car fob, it didn’t work due to a dead battery.

They eventually managed to open the car by entering a code into a keypad on the driver’s side door.

No one was injured in the incident – and the dog was healthy, happy and wagging his tail when he got out.

Neighbour Anna Sabol described seeing the car going round and round. She told WPTV: “I figured ‘how the heck did they manage to do that?’ Then I saw another cop car and another cop car.

“I laughed. I thought they should give that dog a licence to drive. He was a better driver than a lot of them I’ve seen.

“He was doing pretty good until he hit the mailbox. He went around for about an hour without hitting anything at all.”

Max’s owner has promised to replace the letterbox, according to reports.