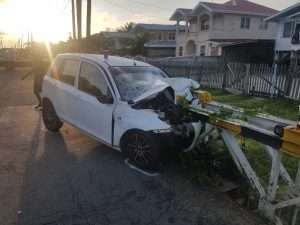 newsroom.gy- A 31-year-old father of one was killed in an accident on the Felicity Railway Embankment, East Coast Demerara (ECD) early Sunday morning.

Dead is David Headly who worked at Republic Bank and was the father of a four-month-old baby.

Police said Headly was driving motorcar PRR 253, reportedly at a fast rate of speed when he collided with a bridge rail on the southern side of the road and sustained injuries about his body.

The accident occurred at about 05:00hrs.

Headly of Powies Close, South Ruimveldt Gardens, Georgetown was removed from the vehicle in an unconscious state and taken to the Georgetown Public Hospital where he was pronounced dead on arrival.