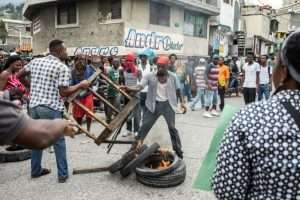 PORT-AU-PRINCE, Haiti (AFP) —Two French citizens were shot dead in Port-au-Prince on the weekend shortly after flying into the Haitian capital to adopt a child, diplomatic and other sources told AFP Monday.

An official at the French embassy confirmed that a French couple had been killed, without giving further details of the exact circumstances of their deaths.

According to two other sources, however, the couple was from the Ardeche region of southeastern France and had arrived in the Caribbean country to adopt a child.

One of the sources said the two were killed in an armed robbery that turned deadly.

A spokeswoman for the Ardeche department confirmed to AFP that the couple, from the town of Saint-Martin-d’Ardeche, had been given a green light last year to adopt their first child.

Haiti, the poorest country in the Americas, has been roiled for two months by protests, which were triggered by fuel shortages but have turned violent and morphed into a broader campaign against President Jovenel Moise.

According to UN figures, at least 42 people have been killed and dozens injured during anti-government protests since mid-September.