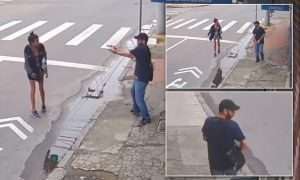 (NEW YORK POST) —  Shocking surveillance video captures the moment a man pulls a gun on a homeless Rio de Janeiro woman before shooting her dead — all because she asked him for the equivalent of 23 cents.

The cold-blooded scene, aired Wednesday on Rede-TV in Brazil, shows homeless beggar Zilda Henrique, 31, approaching the man on Rua Barao de Amazonas in central Rio on Saturday and engaging him as he walks by, reportedly asking for 1 real, which is worth less than a US quarter.

The man keeps walking but Henrique, known to locals as Neia, continues to follow him, video shows.

The man, later identified as Aderbal Ramos, stops, pulls a handgun from his waistband and shoots Henrique at least twice as she turns and tries to flee across the street.

She falls in the middle of the roadway, as Ramos tucks the gun back in his belt and walks away.

A passerby is then approaching Henrique in the middle of the street.

She was rushed to Azevedo Lima State Hospital, where she was pronounced dead, Rede-TV said.

Ramos was taken into custody and was being held at the Niteroi Police Station, according to the station.