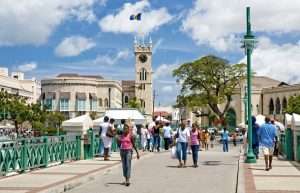 BRIDGETOWN (CMC) — The Barbados Government has approved the framework of a comprehensive review of the existing immigration policy and legislation and will be presented with a new Immigration Bill in January, Home Affairs Minister Edmund Hinkson has said.

“A new Immigration Bill, which we aim to present to the Cabinet in January [2020] and thereafter to Parliament, once approved, will expand our categories of citizenship and permanent residence, abolish the status of immigrant and rectify some still existing inconsistencies between our legislation relating to this concept,” he said.

The home affairs minister noted that one aspect of the new policy will be the reduced time for application. He gave as an example applying for citizenship by marriage, where individuals currently have to wait until after three years of marriage before applying. In future, that time will be reduced to two years.

Hinkson also addressed the difficulty Caribbean Community (Caricom) skilled nationals experience in attaining Barbadian citizenship, pointing out that with the new policy, government was proposing that “as a right, Caricom skilled nationals, their spouse and dependents, are entitled to become permanent residents and then citizens through qualifying by way of time being spent in Barbados.

“Those who have currently been residing in Barbados for more than seven years would be eligible to be grandfathered into citizenship on their application,” he added.

The home affairs minister said the Immigration Department was the first of two government departments to be transformed by way of digitisation in an effort to provide a more efficient service and shorter time frames for processing applications for passports, residency and citizenship.

He praised the department for the “critical” role it is playing in ensuring national development and protecting national security and reassured the staff that their hard work and commitment had not gone unnoticed.