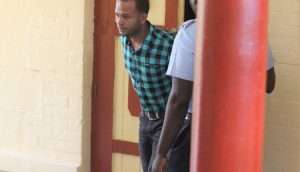 newsroom.gy- A 26-year-old national of the Dominican Republic who arrived in Guyana on a fake passport was allowed entry into the country and even managed to board a flight at the Eugene F. Correia International Airport at Ogle for Barbados.

It was the Barbadian immigration officials who figured out that Jose Alberto Medina had a fake Guatemala passport and sent him back to Guyana.

The national appeared at the Georgetown Magistrate’s Court before Chief Magistrate Ann McLennan where he pleaded not guilty to the charges of uttering a forged passport to Immigration Officers.

The court heard that Media arrived at the Cheddi Jagan International Airport at Timehri, East Bank Demerara on November 18, 2019, and presented the fake passport to Police Constable Suresh Smith and on the same day at the Ogle Airport on the East Coast of Demerara he presented the same passport to Immigration Officer Niketa Azore.

Police Prosecutor Gordon Mansfield told the court that Medina boarded a flight at Ogle for Barbados and upon arrival in that country, he was denied entry and sent back to Guyana.

He was arrested in Guyana and an investigation was launched where he told investigators that he bought the fake passport in the Dominican Republic. He was remanded to prison until November 21, 2019.