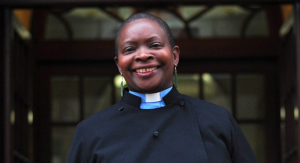 (JAMAICA GLEANER) — Hundreds converged on a packed the St Paul’s Cathedral in London this morning to witness history as the beloved and widely admired Jamaican priest, Reverend Rose Hudson-Wilkin, was ordained as Bishop of Dover.

The beautiful and tear-jerking ordination, which lasted just under two hours, started with a stately procession of dozens of bishops dressed including Jamaican Reverend Howard Gregory, Archbishop of the West Indies, and led by the Archbishop of Canterbury Justin Welby, the principal leader of the Church of England.

The event, though solemn, was loaded with pageantry too.

It attracted a massive constituency of Jamaicans and other well-wishers who waited to get inside St. Paul’s long before the doors opened.

The strong showing was seen as a testament to the great love for Hudson-Wilkin, the first black woman to become a Church of England bishop.

A number of Anglican clergy came from Jamaica for the ordination including Rev. Canon Calvin McIntyre, Canon Hartley Perrin from St Peter’s in Petersfield in Westmoreland and Canon Sirrano Kitson from the St Andrew Parish Church.

Also present was Jamaican, Canon Annette L Buchanan, immediate past president of the Union of Black Episcopalians in Washington, DC.

“When our first female bishop was consecrated in the United States exactly 30 years ago, the event was marred by death treats and some people were threatening to leave the church”, she told The Gleaner.

“So we wholeheartedly welcome the appointment of Bishop Rose Hudson-Wilkin and we pray for her successful ministry”, she added.

And like all other Jamaicans, Jamaica’s High Commissioner to the United Kingdom, Seth George Ramocan, beamed with pride this morning at the ordination as he stood by Hudson-Wilkin’s side.

“We are all extremely proud of Bishop Hudson-Wilkin’s elevation to a higher role, especially since it did not happen by favour but because of her extremely hard work. This is a proud moment not just for Jamaica but for the entire Caribbean region.

“She has been described as a prophet, a pastor and an evangelist. She has challenged the Church of England over its engagement with UK minority ethnic groups and she has spoken forcefully and effectively at many evangelistic meetings,” the Archbishop of Canterbury said at the ceremony.

Hudson-Wilkin was born and raised in Jamaica.

She was educated at Montego Bay High School for Girls and later at Birmingham University.

She trained with the Church Army and was commissioned in 1982 as an evangelist.

She later trained for ordination at Queens Theological College on their part-time course, ordained deacon in 1991, priested in 1994, and served her title at St Matthew’s Church, Willenhall Road, in the Diocese of Lichfield.

For sixteen and a half years, she served as a priest in Hackney.

In 2007, she was appointed as a chaplain to Her Majesty the Queen, and in 2010, she became the first female appointed to the position of the Chaplain to the Speaker of the House of Commons.