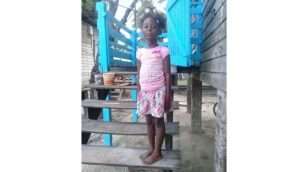 newsroom.gy- A six-year-old student of the Greenwich Park Primary School was on Saturday killed in an accident on the Farm, East Bank Essequibo public road.

The incident occurred at about 17:00hrs.

The News Room learnt that Kelissa Richards left her Lot 4 Farm home unknowing to her mother to purchase chewing gum on the other side of the public road.

As she was attempting to cross the road, she was struck down by motorcar PRR 7918.

She was picked up in an unconscious state by the driver of the motorcar and rushed her to the Leonora hospital where she was pronounced dead on arrival.

As the mother was doing household chores, the child left the yard to go buy the gum on her own.