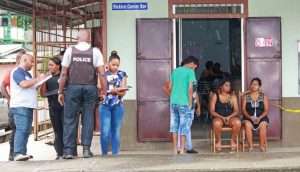 newsday.co.tt- A Father of two was beaten to death with a brick by a mentally challenged man when he refused to offer him a cigarette in Ste Madeleine on Sunday.

Richard Soondar, 55, of Ste Madeleine died on the spot.

The incident occurred at Liev’s bar on the corner of Coquette Street and Manahambre Main Road.

According to a police report shortly after 1 pm, Soondar was standing in front of the bar when he was approached by the man who is said to be known in the village.

The man asked Soondar for a cigarette. An eyewitness said they heard Soondar tell the man he did not have one. The man, reports said, walked away.

He picked up a brick nearby and ran towards Soondar and began hitting him on his head. Patrons tried to stop the man but Soondar was already dead.

Soondar fell to the ground and died. The man stood by the body until the police arrived on the scene. He was arrested and taken to the police station. A district medical officer pronounced Soondar dead.

Crime scene investigators arrived on the scene and took photographs and fingerprints of the brick.

Soondar’s niece, Seeta, said her uncle did not deserve to die in the way that he did.

“My uncle was killed by a mad man. People with such mental problems should not be in the streets walking but in institutions where they can get the help they need. Just look at what happened here today.”

Seeta said it was heartbreaking to know how her uncle died.

“All he did was refuse him a cigarette.”

Soondar’s emotional mother, Ena Sonny, said she could not stop crying on hearing the news that her son was killed.

“He left to go to work this morning (Sunday), he helps a man sells doubles in Ste Madeleine and the man usually picks him up in front of the bar. I was home when a neighbour came and told me what happened. I just can’t believe it.”

The mother of five said her son was a hard-working man who worked to provide for his family.

An autopsy on Soondar’s body will be done on Monday at the Forensic Science Centre. Homicide Region Three Police are investigating.